The flavours of traditional home-cured meats, a symbol of the generous hospitality found across the Conegliano Valdobbiadene area

In the Conegliano Valdobbiadene hills pan e sopressa is more than a snack, it’s a throw-back to a simpler time. Pan e sopressa is also an expression which means to be clear and direct, just like the two flavours themselves. It’s also representative of a way of life and it’s no accident that throughout these hills in the wineries Prosecco tasting sessions are accompanied by this simple staple. The same is true in the osterias and even in the best restaurants where expert chefs work their magic on this happy combination of flavours. It’s no exaggeration to say that sopressa is one of the products which most represents the Pedemontana area of the province of Treviso.

Even though less celebrated than its cousin from Vicenza – which enjoys DOP status – Treviso sopressa (with just one p because in the local dialect double letters are not pronounced and so also not written) has a long tradition of its own. Alongside other cured meats and salamis, sopressa was made at home by those families lucky enough to have the one precious ingredient: pigs. Precious because as we all know, it’s an animal from which nothing is wasted. But precious also by virtue of its centuries’ long tradition in the area which gave rise to the development of expertise in drying, curing and salting, essential skills for storing meat over long periods. This meant the meat could be adapted to a variety of local traditions which would often vary from one family to another.

Danilo Gasparini, Professor of the History of Food and Agriculture at Padua University, has a deep knowledge of these traditions. He has performed countless studies into the food and agricultural traditions in the province of Treviso examining their roots and distinctively local production methods. He explains that making cured meats at home is much more than a simple habit: “Among cured meats the most characteristic of the northern part of the province are sopressa and bondiola, including the col lingual version with cured tongue at the centre. The work was performed by each family usually with the help of a local expert in the art of breaking up the animal – far su in dialect – making sure each part would be ready to be worked fresh and made into cured meats”. 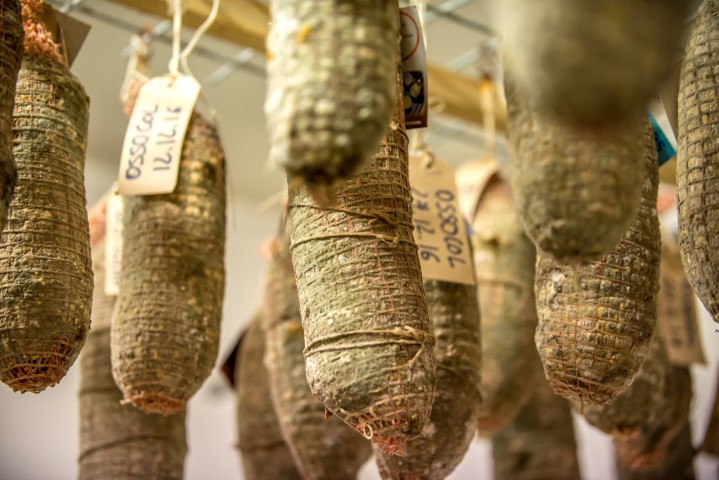 “Once upon a time there were many expert becheri (butchers) not least because families would usually all slaughter their animals at the coldest time of year – between December and January – so as to ensure the best preservation of the meat. The work had to be done quickly so there was a need for a large number of qualified experts to help the families and make sure the work was completed before the traditional deadline of January 17th. This is the day of Saint Antonio Abate, also known as sant’Antonio del Porcello (Saint Anthony of the pig) because he’s usually depicted with a pig at his feet”.

“As cultural and social conditions changed, fewer and fewer families continued in the tradition of the home slaughter and working of the meat also because meat produced in this way is rigorously controlled and may only be consumed in the family itself. Gasparini explains that “to tell the truth there are very few families who continue to keep pigs but the tradition does continue with the Malgari the dairy farmers who during the summer months take their cows up to pasture in mountain dairies (malghe) in the higher ranges of the Treviso province. It’s actually quite common to see a small pig pen next to the cow sheds and these animals enjoy an excellent diet made from the remains of the cheese-making process. This milk product is filled with the aromas of the grasses and flowers the cows eat which in turn flavours and softens the meat produced from the pigs. Once again a local tradition born from the need to avoid wasting any resource gives rise to one of the secrets of the local cuisine and production of such tender, fragrant cured meats. This alongside the expert hands of those who know the art of far su and who understand how to cure the meats in the best possible conditions.”

So in each thick slice of local homemade sopressa, symbol of hospitality in the Conegliano Valdobbiadene hills, there lies months of careful, patient preparation, long artisanal processes and careful preservation, always the main concern with meat production. Of course modern production methods have created safe products (often of excellent quality) but it’s also true that these have taken away some of the flavours and aromas. And a bit of the poetry, too.

[This article was originally published in the Visit Conegliano Valdobbiadene magazine, issue Autumn Winter 2017. The magazine is available here]