The route of the Sundial

A route to discover the sundials in the region of Conegliano Valdobbiadene Words by Gianantonio Geronazzo, photos by Luca Comaron

Precious sentinels of time. But also authentic masterpieces of scientific archeology, which combine tradition, art and modernity. These are sundials, so-called because their measurements are based on the position of the sun. They are the oldest time measuring instrument, and were used in ancient Egypt more than 4000 years ago. They are also very precise, and the only device capable of measuring time at one’s precise meridian. They are thus a combination of time and place, and it is no coincidence that sundials appear more often on the facades of houses, villas and country estates rather than in civil and religious places. A “ground” tool, because it is tied to the earth, and thus tied also to the peasant farmer traditions, as it marks the inexorable passage of time, the changing of the seasons and therefore the various phases of work in the fields. At the same time, it is also a metaphor which reminds us of the fleetingness and transience of existence. Each sundial always has its own motto, and in many examples – “Fugit irreparable tempus”, “Omnia tempus habet” “Omnes feriunt. Extrema necat “- it is there to remind us of time itself. 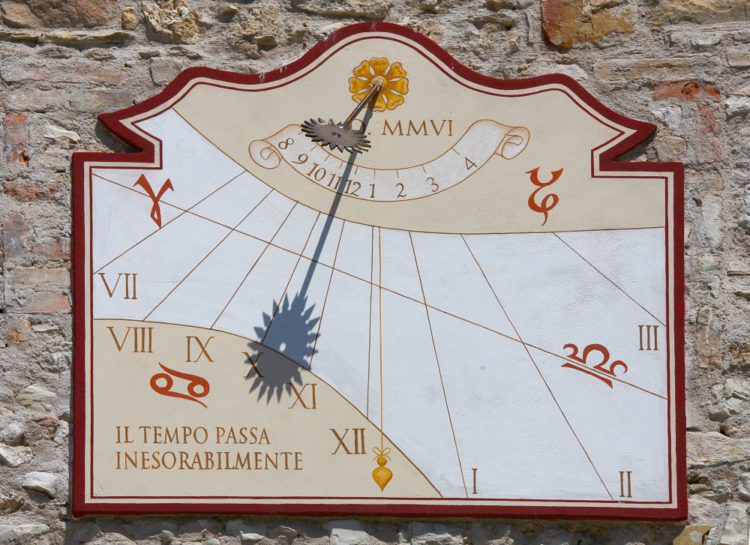 A combination of mathematics, astrology and philosophy, but also art, as very often sundials have drawings and paintings etched onto them. A diverse mix of disciplines come together in a tool that, even after thousands of years of history, still today represents precision and modernity. The illustrious local poet Andrea Zanotto wrote in his book “Only peaceful hours count. Sundials of the Treviso Alps“, published by the Comunità Montana Prealpi Trevigiane in 1999 that “It is nice to see that even today new sundials are springing up here and there, which shows an increasingly acute awareness and perennial sense of time.” And rightly so. In the district of the Prealpi Trevigiani, of which Conegliano Valdobbiadene is part, there are more than 150 sundials. The oldest date back to the seventeenth century and show the time in Italian hours, i.e. the time remaining before sunset. But many are of modern origin, a sign that interest in sundials is still alive and well rooted in the local area. 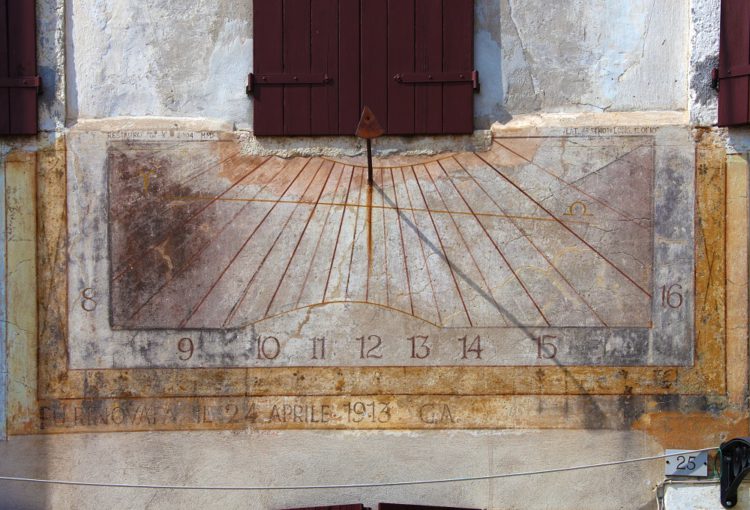 By way of confirmation of this, in 2017 (From March 24 to 26) Valdobbiadene will host the XXI Gnomonics National Seminar, which returns to the Veneto after 17 editions and 25 years. It will be a three-day meeting of enthusiasts and scholars of gnomonics, the science combining knowledge of mathematics and astronomy, which enables the construction of sundials. The National Seminar will not be limited, however, to a meeting of erudite scholars. The organizers are hoping the event will serve to inform the public but also wish to create a new initiative: a sundial discovery route, a project aimed at creating an itinerary for curious travelers, walkers and cyclists. The route will start from Valdobbiadene and cross the municipalities of the Quartier del Piave and the Prealpi Trevigiani. Walking the sundial route, which will remain as a legacy after the Seminar, will provide further knowledge of these special landmarks left by man and that for hundreds of years have enriched the landscape of Prosecco Superiore with art, and scientific culture. On this occasion, along with the opportunity to view antique and modern sundials, we will also rediscover local historical figures who were sundial makers, such as Giovanni Follador, Giuseppe Flora and Giovanni Sartori. This event, then, confirms the profile and importance that the local area places on this fascinating instrument. And as Andrea Zanotto detailed in the book mentioned above: “… the sundial as an expression of a desire to understand the passage of time (with time here also taking on a meteorological value) is always something you want well placed within a natural setting.”