The farmer who writes

Diego Stefani, pugnacious and proud farmer and restauranteur, is the poet of roots: the roots of plants, people and stories that are both deep and powerful

Thus Diego Stefani describes his pride at being a farmer. And he does so through verses brimming with evocative force, and full of the harsh sweetness of the local dialect spoken in Combai, an ancient village perched among woods and vineyards a stone’s throw from Valdobbiadene. 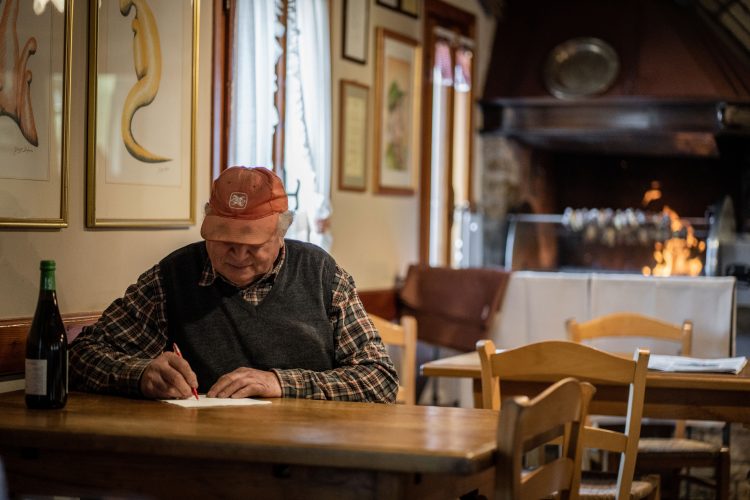 Diego was born in the village of Combai in 1947, and has rarely left it. Because he’s a farmer, so tied to his land. And because he’s a restaurateur, who was born and raised in what was then called the Al Cacciatore, before relaunching it under the name Ostaria al Contadin together with his beloved wife Carla in 1972. But first and foremost Diego is a poet, although he himself prefers to be thought of  as “a farmer who writes”. He’s always expressed himself through verse, both for pleasure and almost out of necessity. When he first started writing, he would only share his poems with friends. Next he started including some of his poetry on the wine labels and menus in his restaurant. Then he started performing recitals of them in halls and theatres, before finally publishing them in a book. His verses are simple and descriptive, and steer clear of lecturing. They’re snapshots in words, collections of the memories of a man who, despite the many difficulties he’s faced, continues to champion the little things in life and the value of family, as well as the community spirit based on solidarity, harmony and shared knowledge that characterises daily life in a small village like Combai. This is a village in which, as Stefani describes it, God is Father and the Earth is Mother. It’s a place where the roots of plants, men, stories and poems are shared, deep, and powerful.

Diego knows those roots intimately. Not only because he grows them in his fields, but because he lives and breathes them every day with his humility and sensitivity. Add bravery to that list too, as illustrated some time back, when he decided to revive the fortunes of Verdiso, a native vine that today is almost exclusively used to make Prosecco. Much against the prevailing opinion of the day, he chose to vinify it as a single variety wine, single-handedly sparking a renaissance of this ancient grape, and making a wine that has now established itself as one of the most quintessential expressions of the oenology within the northern reaches of the Province of Treviso.

But the poet farmer didn’t stop there. More recently, in his local area, which is dominated by vineyards of the white-berried grapes grown to make Valdobbiadene Conegliano DOCG, he’s started making Merlot and Cabernet, creating his so-called “500” wines – a name he chose because of the altitude the vineyards are located at. 500 m above sea level is verging on an extreme altitude for these vines, but thanks also to the shared commitment of his entire family, his estate (named Crodi) produces a red with an exclusive character.

This demonstrates that Diego is both single-minded and immensely proud of what he does, proud of his hands that he sinks deep into the land he loves and deeply respects (he uses the bare minimum of plant protection products and a highly intelligent approach to farming), and proud of his family, with whom he’s managed to create a business that’s truly one of a kind. So Diego is a man made of poetry and toil, of courage and curiosity. Add simplicity and toughness to that too. Much like the humble, welcoming and sincere wooden door set into the ancient stone wall you pass through to enter his osteria, which today is expertly run by his daughter Laura. But it’s a place where the love and dedication of Diego and Carla will remain forever present, pulsating like a beating heart. Poetry to be discovered and savoured.