Locanda da Condo in Col San Martino is redolent with a love of the land, history...and also foresight

The liberty style that Enrico’s grandfather Giovanni Canel chose for the trattoria he opened shortly after the Great War can still be seen in the trattoria. Subsequently, his father Giocondo, or ‘Condo’ for short, made many changes. These enhanced its profile so much that in the sixties and seventies it became a popular place for intellectuals, politicians and artists to meet. ‘Condo’ was one of the original promoters of the “White Wine Road”, a forerunner of the current “Prosecco Road”. He brought up his son Enrico in a unique environment, where the good honest cuisine his wife Rina served up, the famous guests, and his creativity and foresight meant that the ‘local flavours’ his guests enjoyed were not just the ones served to them at the table, but also those that forge enduring friendships.

Today, Enrico and his wife Beatrice run the establishment, which is situated in Col San Martino. But the ambiance of the four delightful rooms remains unchanged, and the trattoria’s authentic charm is already apparent from the outside, with its small terrace adorned with flowers, the large sign painted on the wall and the liberty-style one hanging in the corner.  You can see it, too, among the myriad details of the furnishings that adorn this beautifully decorated trattoria in the heart of Veneto. You can see it, too, in the menu, which is not too long but utterly traditional, though Enrico didn’t learn his cooking skills from the family: “My mother had other plans for me and refused to teach me anything, hoping I would follow a different career,” he says. But he sought out such renowned teachers as Angelo Paracucchi and Roger Vergé to experiment and develop his own culinary techniques. And he makes his own choices to provide the very best in Veneto cuisine “which couldn’t be more Veneto if we tried”.

“It was my continuous quest for new ideas and innovative recipes that made me choose to focus exclusively on locally-grown ingredients and make traditional family dishes,” he explains. “And as time passes, and the world seems to get smaller and smaller and more confused as it becomes ever easier to get hold of any ingredient in any season, I feel an ever-stronger desire to become an ambassador, indeed a defender, of a cuisine that values local producers. These are always my main suppliers, as they favour seasonal produce over a larger selection, which is clearly more attractive, yet ultimately blander. Because buying local produce is not just common sense but, especially in our hills, where supplies were once difficult to come by, it’s always been the rule rather than the exception, born out of necessity. And ultimately it represents the foundations of our local cooking traditions. These are the same ones that I honour, ideally without side-lining more modern cooking techniques, but always with the aim of making dishes of the highest quality. In the winter months, these include sausage with horseradish or mashed potatoes, pasta and bean or potato soup, mushrooms and chestnuts, roasted meat with white polenta, boiled meats or guinea fowl with pevarada sauce. In the summer our menu includes rice and peas, ricotta or polenta gnocchi with cinnamon, local sausages and cheeses, and cured meats: a real profusion of Veneto cuisine, all made using ingredients from the farms and fields of this incredible corner of the world.”

Listening to Enrico talk about his cuisine – which he also loves to do with his guests in his trattoria – one feels not only the fascination that has been his life for over forty years, but also the burden of responsibility of a man who knows he lives in a special place and wants to highlight it. “I like to invite our guests to take a stroll along the paths near our restaurant, if only to aid digestion. From the Locanda, it’s an easy walk to the iconic medieval church of San Vigilio, which many people will have already seen depicted in some of the most captivating photos of the Unesco World Heritage hills. Take a longer walk that crosses a small canyon and you can reach the fascinating Gor de la Cuna or even the almost wild area of Palù. I believe that gaining insight into the local area also adds to the experience of tasting local specialities, making them more memorable and exclusive.” 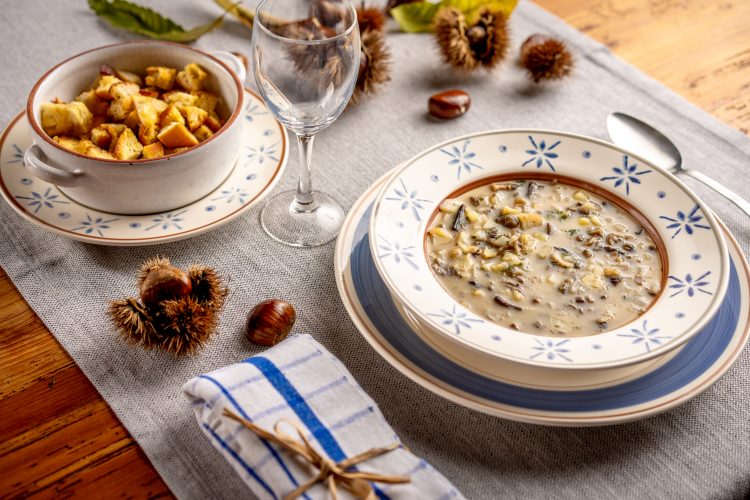 [This article was originally published in the Visit Conegliano Valdobbiadene magazine, issue Autumn Winter 2021. The magazine is available here]