Aldo Rebuli: walls with something to say

Ancient walls used as canvases, with the hills as their frame. This is the art form chosen by a multi-talented artist who prefers to be defined as a ‘creative’ rather than an artist. And he’s chosen the Prosecco hills of Conegliano and Valdobbiadene to express his art form

“When I was fourteen, I found it thrilling to go out at night into the hills of Valdobbiadene, where I was born and raised, to tag my signature on abandoned walls with spray paints. One might question the legality of this – though I’ve never once defaced any buildings of value – but it enabled me to express myself and show off my creativity.” Back then, his creativity was fuelled by the restlessness of adolescence and the desire to rebel against a course of study he wasn’t enjoying. “At the behest of my family I had decided to study to become a chemical analyst, but my heart wasn’t in it,” explains Aldo Rebuli, who is now 42. So while he was struggling with his studies, which he found demotivating, he was also nurturing those talents and aspirations that did motivate him: he did this by pursuing his interest in figurative drawing and painting, sculpture, graphic design, carving and, above all, expressing himself with spray paints, until he had perfected his own distinctive hyper-realistic style. 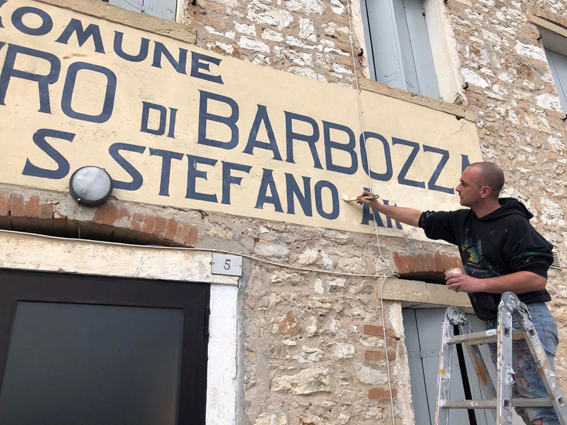 Since then, he’s painted hundreds of walls and participated in numerous international street art events, but also worked in a design studio where he completed numerous prototypes, interior design projects and decorations. Then, a decade ago, he decided to put his creative skills to good use by placing his works within  the environment that surrounds him, transforming anonymous walls of abandoned buildings into site-specific works of art that also serve as an invitation to reflect upon the purpose of that particular place and landscape.

“Before I add my work, there is the place itself, and I travel far and wide to seek these out because the location has to be interesting. Usually now I’m commissioned by clients, and I always try to understand very carefully what they want and what motivates them: even in the case of commissioned works, I make it a priority to ensure that the work enhances and blends into its surroundings, rather than detracting from them, since the location provides the permanent picture frame for the finished works. It doesn’t matter to me whether my work is in a spectacular natural environment, the interior of a room or a less attractive industrial setting: what’s important is harmony and that the end result leaves a lasting impact on the viewer.”

More recently, Aldo Rebuli has focussed his attentions on the ancient history of “his” hills. “One of my most vivid childhood memories is of a walk I took with my dad around the village of Saccol. During the walk, he broke open a stone and to our surprise we found a fossilised shell inside. He’s one of the few people in Valdobbiadene who’s never owned a vineyard, and he explained to me how in the distant past, this land used to be under the sea and that’s partly what makes Valdobbiadene wine so unique – it’s a reflection of the history of the land it grows in – a land which gradually replaced the sea that was originally here. As a five or six-year-old I was very impressed by this story. Now I have the opportunity to express this story through my creativity, and I’m trying to depict it on some of the area’s more ancient walls: it’s not always easy to find the ‘right’ places and get permission from the owners, but I’ve no intention of giving up.”

[This article was originally published in the Visit Conegliano Valdobbiadene magazine, issue Autumn Winter 2021. The magazine is available here] 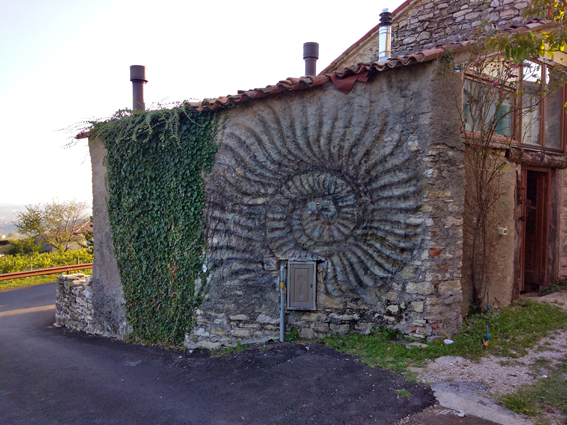