Castles in the Conegliano Valdobbiadene area

A land where history and stories of lives come together, a land where castles have dominated some of the most panoramic hilltops since medieval times. Fabulous, imposing edifices strategically positioned so as to exude power and defend the land. Buildings that today offer unrivalled views of the Prosecco Superiore hills. Places filled with the past and artistic treasures, surrounded by the majesty of nature.

Any tour of the area’s castles must surely start in Susegana, the “City of Two Castles”. The town is dominated by the Castello di San Salvatore built in the 13th Century and which became one of the largest in Italy. It is today and has always been home to the Collalto family, who resisted the onslaught of the Hungarians in the 15th Century and prospered after the 16th Century. This was a time when many artists came to stay, either to add their work to its splendour or simply in search of inspiration. In the 18th Century Count Odoardo had a large building with hanging gardens built facing the expanse of the property’s vast holdings. It was here that, in the 19th Century, the family introduced new cultivation methods for the land but above all for the vines which made their already famous wines even more revered.

The expanding and varied nature of the Castle’s buildings tell the story of its evolution from a defensive fortress to a beautiful home, from a feudal property to a modern agricultural business. An evolution that was tragically interrupted during the Great War when it was partially destroyed. Over time the Collalto family have lovingly restored the castle and its buildings and now, as well as a magnificent home, it is a centre for art, culture and events.

The Castle plays host to Vino in Villa, the biggest and best known annual Conegliano Valdobbiadene event which takes place on the third weekend in May. For Vino in Villa guests are invited in to enjoy the castle and its elegant gardens surrounded by medieval buildings and imposing ramparts from where the soft hills of the immense property may be admired, while enjoying a glass of Prosecco Superiore DOCG. 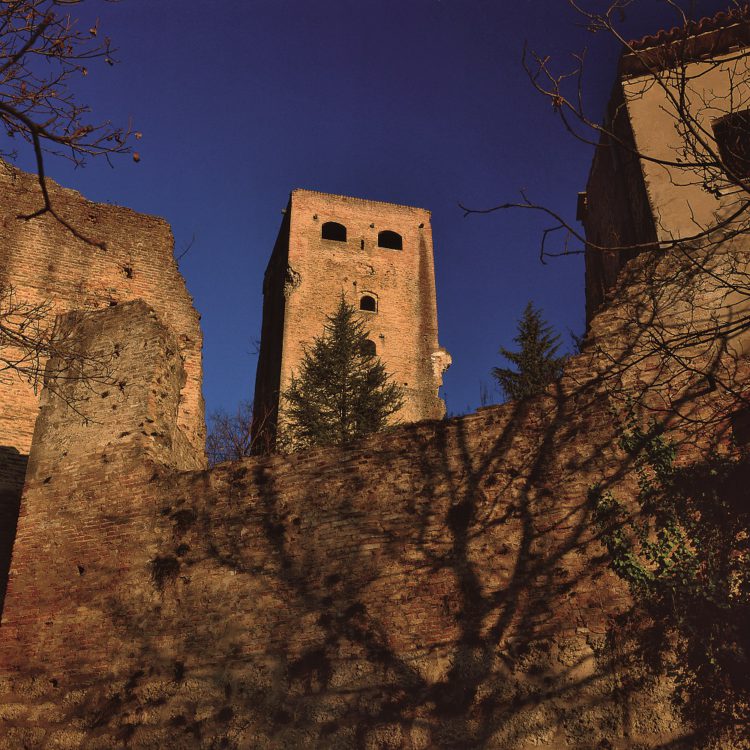 A lovely walk from the Castle of San Salvatore leads to the ruins of what was the first Collalto seat in the Piave region. Built in 1110, the first part of the Collalto Castle was the imposing tower which still rises above the ruins of its three impregnable surrounding walls. Following the construction of the nearby castle it took on the role of a defensive structure with diminishing importance and was gradually destroyed by Collalto family in-fighting. It then became a monastery which was suppressed by Napoleon, and then a silk mill. Its slow decline culminated in the First World War during which is was destroyed and effectively abandoned, even though legend has it that the ruins are haunted by Bianca, a young lady walled up in the castle by a jealous lover. However, this does not deter real visitors in flesh and blood from visiting the medieval hamlet to enjoy its stunning location and the numerous cultural events, guided tours and a lively antiques market (held every second Sunday from Spring to Autumn).

Further west, between Farra di Soligo and Col San Martino, we find the three Torri di Credazzo, joined by walls which create two internal courtyards. This is all that remains of a fortress that was built, probably by the Collalto family, between the 9th and 10th Centuries, then given to the Da Camino family before being returned to the Collalto. This castle was part of a complex defensive system which extended to the castles in Col San Martino and Soligo, today lost. In 1413 the castle was destroyed by the Hungarians and abandoned. Only in the last few decades has this lovely building been brought back to life with a loving restoration performed by an enlightened owner. The Torri di Credazzo is not open to the public and its ornate gate is difficult to find as it lies at the end of a winding path through the vines that for centuries were its only guardians. In order to breathe in some of the atmosphere and enjoy the spectacular views, visitors may go to the nearby small church of Lorenzo, a medieval building reachable by foot on a path through vineyards. The walk is almost a mile but the fabulous view makes it well worth the effort. 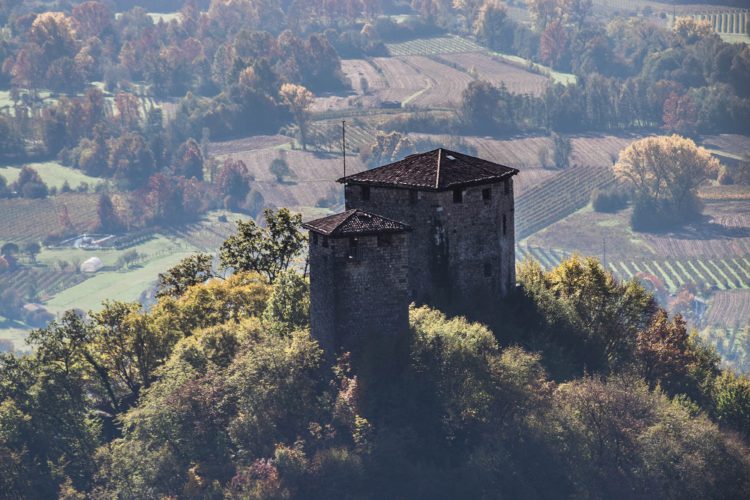 In the heart of the Cartizze area we find another long-forgotten fort which played a role in the Great War due to its strategic position. The Castello di Mondeserto, built in the early 12th Century at the summit of Col Crosét above the village of Saccol, was used by Austro-Hungarian forces as a bunker in 1917. The Austrian army found the castle already overgrown and in a state of abandon, but sadly the concrete armaments they constructed are still visible.

Left almost totally abandoned for close to 500 years, today the castle reveals little of its history. Though it’s difficult to say what defensive systems were employed or what buildings were housed within, the existing ruins show that the original structure was made up of a robust wall which encircled the entire top of the hill. The ruins of this outer wall are still visible here and there among the Cartizze vineyards (we are in the heart of the denomination). To visit the castle, follow the brown Luoghi della Grande Guerra (Places of the Great War) signs and admire the beauty of what is a quite unique panorama.

Further north, in Cison di Valmarino, a prominent spur on mount Col de Moi has been used since the end of the 12th Century as a military fortress. The Caminesi family made the fort habitable by building a small villa and a central tower surrounded by a wall. It then became the property of the Venetian Republic before being given, as war reparations, to the Brandolini family who transformed the fortress into a magnificent family seat. In the second half of the 20th Century the castle was used as a cultural and spiritual centre by the Salesians and at the end of the 1990s it was transformed into a boutique hotel called Castelbrando where carefully restored 12th Century architecture and 16th Century buildings sit side-by-side with baroque flourishes. A panoramic cable car takes visitors up to the castle where there are event rooms, restaurants, bars and a theatre. At an altitude of 400 meters the wide terraces surrounded by crenelated walls offer fabulous views of the village of Cison below and the vine-embroidered Valsana hills.

In Vittorio Veneto, created at the end of the 19th Century from the fusion of the villages of Serravalle and Ceneda, the old fortresses of the two centres, emblems of their very different histories, are still visible. In Serravalle, stronghold of the Da Camino family, the Castrum, was built in the 12th Century. Around its ample fortified walls a lively commercial centre was built up based on trade with Germany. Inside the medieval walls a large garden may still be visited along with a tower (now a B&B) and an ancient basement wine room dug out of the rock where, in summer, Conegliano Valdobbiadene wines may be enjoyed. The Castrum is also host to a prestigious summer theatre festival.

Ceneda is dominated by the Castello di San Martino on the San Paolo hill and linked to the Cathedral square by a short road offering lovely views. In contrast to its neighbour, the castle, built in the 5th and 6th Centuries and often damaged by wars and earthquakes, was used to defend a non-fortified centre spread among the fields. As well as being home to the Bishop of Vittorio Veneto, the castle plays host to numerous cultural events and is also a centre for spiritual retreat (Casa di Spiritualità) open to anyone wishing for a time of quiet reflection and prayer. 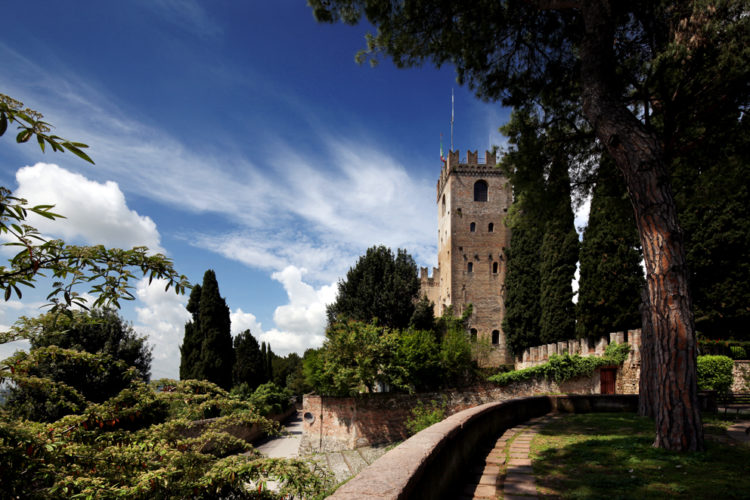 Any tour of the castles in the Conegliano Valdobbiadene area starting in Susegana cannot but end a few miles from there at the Castello di Conegliano. Even though it may be reached by car, the walk up from the heart of the old town centre is lovely as the path follows the ancient walls up to the summit where elements of a fortress from the 11th Century may be admired. This is the centre of Castevecchio, inhabited since the 14th to 12th Centuries B.C., where we find the Torre della Guardia, today home to the Civic Museum with its excellent collection of armour and archaeological displays. From here there are magnificent views over the city and across the beautiful countryside which surrounds it.

No less stunning are the views of the nearby Torre Mozza (or Saracena) which houses a restaurant, or the lovely walk down to the Madonna della Neve oratory built on the foundation of a defensive gate. The path then returns to the old centre once defended by walls which can still be seen inside the buildings where thousands of years of history and daily lives continue to intertwine.